The library(broadcast) library was invented to realise GUI applications consisting of stand-alone components that use the Prolog database for storing the application data. Figure 11 illustrates the flow of information using this design 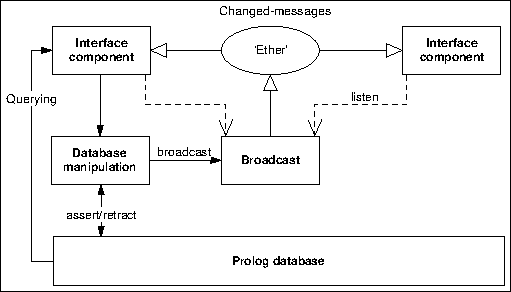 Shouting is often used to inform about changes made to a common database. Other messages can be “save yourself'' or “show this''.

Requesting is used to get information while the broadcaster is not aware who might be able to answer the question. For example “who is showing X?''.

broadcast(+Term)
Broadcast Term. There are no limitations to Term, though being a global service, it is good practice to use a descriptive and unique principal functor. All associated goals are started and regardless of their success or failure, broadcast/1 always succeeds. Exceptions are passed.
broadcast_request(+Term)
Unlike broadcast/1, this predicate stops if an associated goal succeeds. Backtracking causes it to try other listeners. A broadcast request is used to fetch information without knowing the identity of the agent providing it. C.f. “Is there someone who knows the age of John?'' could be asked using

If there is an agent (listener) that registered an‘age-of' service and knows about the age of‘John' this question will be answered.

listen(+Template, :Goal)
Register a listen channel. Whenever a term unifying Template is broadcasted, call Goal. The following example traps all broadcasted messages as a variable unifies to any message. It is commonly used to debug usage of the library.
listen(+Listener, +Template, :Goal)
Declare Listener as the owner of the channel. Unlike a channel opened using listen/2, channels that have an owner can terminate the channel. This is commonly used if an object is listening to broadcast messages. In the example below we define a‘name-item' displaying the name of an identifier represented by the predicate name_of/2.
unlisten(+Listener)
Deregister all entries created with listen/3 whose Listener unify.
unlisten(+Listener, +Template)
Deregister all entries created with listen/3 whose Listener and Template unify.
unlisten(+Listener, +Template, :Goal)
Deregister all entries created with listen/3 whose Listener, Template and Goal unify.
listening(?Listener, ?Template, ?Goal)
Examine the current listeners. This predicate is useful for debugging purposes.